Aidan was diagnosed with Medulloblastoma, a malignant brain tumor, on December 19, 2009 after a very brief illness. He endured multiple surgeries and five rounds of high dose chemotherapy.
Our sweet, very brave boy lost his battle and went to heaven on July 30, 2010. He was 3 years old.
Please follow Aidans journey through the blog entries below.
We will contine to share stories, post pictures and make memories in his honor. Aidan will forever be remembered.

We are still at Children's. I am going to begin calling it our second home. Let me start by saying that Aidan is definitely feeling better the last couple of days. Again, Aidan is keeping everyone busy...

We were admitted on Memorial Day for a GI bleed which seems to be healing well for now. With his 4th cycle, he had a bad gut. After his 5th cycle it has been a VERY bad gut. I am scared as to what stem cell transplant will be like.
Since we have been dealing with belly bleeding and some significant pain, an abdominal x-ray was taken. His belly looks okay (the lining of his gut will need to be looked at via endoscopy at a later date). However, they caught a glimpse of his right lung which showed an abnormality. A chest film was taken, followed by a chest cat scan last night. Aidan has 2 nodules in his right lower lung. It is highly unlikely that this is tumor spread as Medulloblastoma very rarely moves outside the CNS. It is believed to be an infectious process, most likely fungus. He is scheduled for surgery tomorrow to have them resected.

For as awful as this is, we are so very thankful that this was caught now. If he was to move to transplant with a disseminated fungal infection, it would have certainly taken his life. God is watching over this sweet boy.
We have a laundry list of things to accomplish prior to transplant...endoscopy, lumbar puncture, MRI of his brain and spine to determine tumor status, and treatment of this infection.

We are hoping treatment does not delay transplant too long. Fungal infections are incredibly difficult to treat and the courses are typically long. If we are unable to go to transplant in a timely manner, his oncologist stated that it is possible he may receive an abbreviated chemo cycle in the interim.

It looks like he will remain in the hospital at least through the beginning of next week. Please keep him in your prayers for an uneventful and successful surgery tomorrow. I will update when I am able.
Posted by Patty McMahon at 8:32 PM 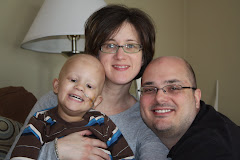 We have established a not-for-profit memorial foundation, Aidan's Army, in honor of our little Aidan. We want to turn our experience into hope for other children with brain tumors.
All funds donated to Aidan's Army will be used to support research and advance treatments of childhood Medulloblastoma. If you would like to donate ...


Thank you for your generous support!